How they tried to bomb me in Kaduna but failed – Buhari

Travis Scott and Kylie Jenner have both been scrapped from the cover of the upcoming issue of W Magazine, and this comes amid the rapper’s legal drama following the Astroworld Festival tragedy.

Per Complex, the magazine rushed to cancel the cover and now the apparently leaked cover is making the rounds online.

The outlet adds that the decision to cancel the cover was made by Kylie Jenner and Travis Scott along with the magazine. And the leaked cover shows Kylie and Stormi standing up while Travis has his ear to her stomach, listening to the heartbeat of their unborn baby.

“W editors have cleared any planned coverage of Travis and Kylie from their website, but the magazine was already printed, and now they are trying to stop the delivery trucks,” an insider told Page Six after the event. “In the light of what happened at Astroworld, the interview and cover lines seem inappropriate, to say the least.”

See the leaked cover as shared by TMZ: 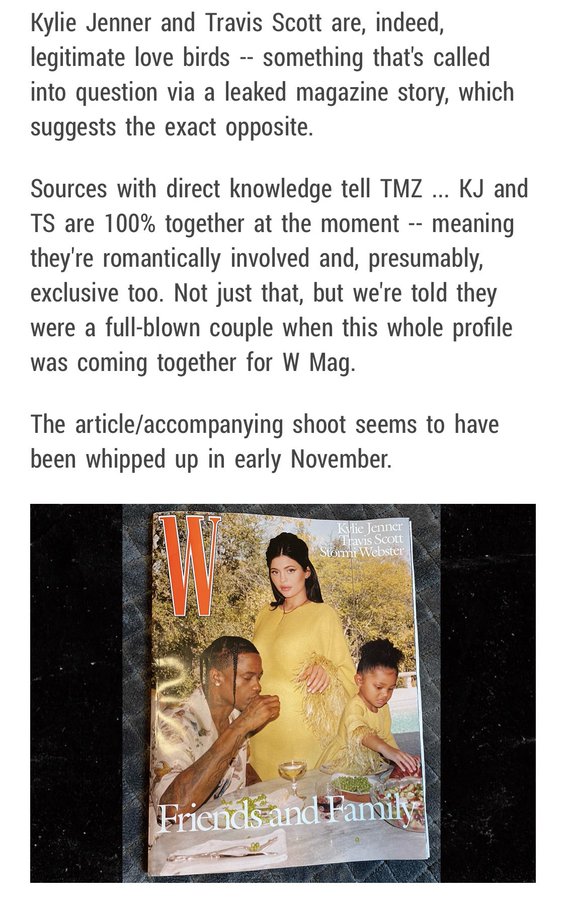 Sola Sobowale Reveals Struggle on the Set of “King of Boys”: “I Opened My Mouth and Nothing Came Out”

Tiwa Savage Set to Perform at the Coko Festival in Manchester

How they tried to bomb me in Kaduna but failed – Buhari

Timi Dakolo Requests Wife, Busola to Send Him Money in Response to Her Birthday Message

Bald and Baddie: See All the Ways DJ Cuppy is Rocking Her New Year

Rihanna Announces Launch of Physical SavageXFenty Stores Across The US

AFCON 21: We’re doing the talking on the pitch – Eguavoen

Weeks after getting engaged, nurse, fiancée killed in road crash

Boris Johnson calls end to most Covid restrictions in UK